Why I Will Probably Never Play Runequest, and some rambling

I like rules light and I’m low prep. Super low prep. Mostly none.

I think I’m too lazy for crunchy games (caveat, for a given value of crunch, some GURPs players might think my bar for such things is set pretty low) Or maybe I don’t have enough time. However the same pattern tends to emerge. I get the bug for Runequest (largely from listening to the Grognard Files podcast, which is excellent) or WHFRP, I read about it, begin to fear the sheer weight of rules and flee back to the comforting arms of Swords & Wizardry or Dragon Warriors. Not that I don’t feel these systems have their problems, I can however run either without any reference to the books in terms of rules. Now, I accept that these are the games that I am most familiar with and if I were to bite the bullet and actually run some Stormbringer 1st edition (like I secretly want to) then I might get to a point where it is as easy for me to handle as my beloved S&W: White Box. If. 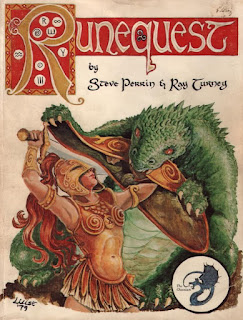 The weight of the new is a terrible thing however. Runequest comes complete with the behemoth Glorantha attached. A huge draw to the game, not many fantasy settings are as widely realised nor carry such depth. That being a double edged sword however. I know next to nothing about it. I don’t even know if I know enough to know how much I don’t know. Before I descend into Casanova Frankenstein territory, that is a bit of a stumbling block that I’m sure is not only relevant to me. So when you add unfamiliar rules and an unfamiliar setting we get to the demon of DMing: Prep.

If I have to do more to prep for a session than stare out of the window for five minutes, that is too much. I’m busy. I have an irregular schedule. Work strange hours. I juggle lots of things socially. So does everyone else. I’m not whinging about these things. They are just facts. My gaming time, no matter how much I enjoy it, is limited (currently non existent.) So Glorantha or Tekumel or Talislanta , as much as I would love to learn about them, are beyond my means in terms of time. I need a setting that just sits perfectly in my imagination space, I believe other people call this their brain. So Legend, the Dragon Warriors setting, is a good example of this for me. It draws heavily on the same influences that I had as a child. I loved Robin of Sherwood on ITV and so did Dave Morris and Oliver Johnson, the creators of the game. Also as I first picked it up as a snot nosed minor and it has lived in my imagination for a long time. I mean, I used to be able to look out of my bedroom window in North Yorkshire and see bleak moors and dark, cobwebbed forests. It’s not a great mental leap to fill those forests with mystery or be scared of what might be lurking in the mists on those moors.. 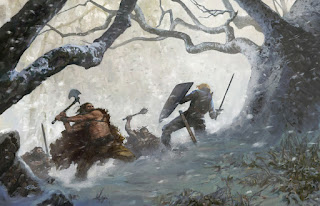 The Grim North (see practically every other post on this blog) is a similar situation for me. As a setting, it is grown out of influences and decisions I made specifically to run a D&D campaign. My dislike for clerics and demi humans as playable races are heavily evident (Although originally I had planned to include such things to provide a familiar environment for players, I binned them. It hasn’t proved to be a problem.) As a result it draws in all the things I think are good influences for some old school D&D. Particularly a game played over google hangouts with a semi rotating cast of players. It’s a sword and sorcery setting, it has a particular aesthetic that I find easy to call up and work with. Another blogger, I forget who but would be happy to be reminded, stated that posts of random setting notes or influences act like magic spells a GM can read to instantly invoke the required mindset to run that game. That’s important I think. When my head is in the right place for a game is when it tends to sing. Players doing standard player things, like going off in unforeseen directions and deciding on courses of action that there is no prepared material for, are easier to cope with. Indeed this is where the fun of running a game is, even if it can seem daunting at times.

So no Runequest for me, at least until I enter retirement and my projected gaming renaissance. It looks really cool though...
Posted by Dominic at 23:53