The Black Hack: More of a Love Letter than a Review

For those who don’t know: The Black Hack (available here) is a rules light old school D&D inspired game that uses a simple roll under your stat resolution mechanic and is focused on player rolls. Now on its second edition. Examples you say? You try to hit the goblin? Roll under your Strength. You want to dodge the blow dart? Roll under your Dexterity. It’s pretty straightforward. This simplicity at the heart of the game is its strength. You’re never going to get a simulationist experience playing this way and if you prefer complex machanics then this is not your bag. However this game has spawned a thousand hacks in all sorts of genres, the simplicity of the rules making it extremely versatile. You can do anything with this mechanic, as long as it’s simple. I mean you could say the same of any mechanic really but you only have to search DriveThru RPG to see how this ruleset has captured the imagination of independent games designers. I mean with such a proliferation of hacks the quality is wildly variable but some of them are even playtested, which is nice, and rather good.


So at this point I should probably add the disclaimer that I know David Black. For it is his brainchild that I am writing about. When I say I know him, I mean to the extent that he’s played in some of my online games, that we hang out and play games at Dragonmeet, and that he patiently listens while I bitch and whinge about people I don’t really know except from their blogs and so forth. I was also once mistaken for him while I was running a game in the bar at Dragonmeet, my only claim to roleplaying fame.

The 1st edition rules are all you need to play the game. Indeed I used to keep a copy in my backpack so; that along with some paper, pencils and a dice roller on my phone; I was table ready at any time should the opportunity arise for a game of some sort. I have introduced numerous new players to the hobby because of this. The Black Hack uses slightly different mechanics to old school/retro forms of D&D but is backwards compatible because things like hit dice and spells still have meaning in TBH rules. You can easily convert the module of your choice on the fly if you wish.

There is now a second edition of the game. It contains some rules tweaks, a bestiary and shed loads of GM tools (generally in the form of random tables.) This now truly is all you need for the table. Plus, it’s good. The first thing I saw in the book that I instantly loved was the what are the monsters doing when you encounter them tables. In the bestiary each monster entry has two 1d6 tables that combine you give what the bad guys are up to, should you randomly encounter them for instance. So if I encounter pig faced or men I roll a 3 and a 5 to discover they are (3) drunkenly bickering over... (5) ...1d12 left boots. Nice. Plus it comes with this cool Sean Poppe illustration...

In addition to this I get random tables for dungeons, for wilderness adventures, NPCs, adventure hooks, traps, poisons, magic stuff, treasure, and some tasty GM tips too. It looks great too.

Can it all be positive? I mean, no. When your rules are this light there are going to be cases they just don’t cover. Player vs player is one that seems to constantly come up on social media discussions (admittedly it’s mostly theoretical questions I see rather than an actual problem from play.) There are always going to be people who aren’t comfortable making things up, prefer a definitive word of god answer. As the GM I miss rolling dice (except for damage, *insert evil laugh*) and PCs can eat up old school modules as Black Hack PCs at lower levels are generally more powerful than their B/X equivalent, for instance. The answer to all this is as simple as you can change stuff you don’t like. A simple rules framework means it is easy to modify without ruining everyone’s fun. Hence all those hacks of it I guess.

I’ve used this game to run either impromptu fantasy games or sword & planet games, combining TBH with Warriors of the Red Planet in my Warriors of the Black Planet games. It’s worked out great and I’ve enjoyed myself thoroughly. I’ve only been a player in a Black Hack game once, and back then it only existed as a handful of sheets of paper that Dave had printed out and brought with him to Dragonmeet. He ended up running it in the bar using Barrowmaze, which he’d bought an hour beforehand along with some hideous, green, neon dice. It went smoothly and I knew then that the game was going to be good.

Now my kickstarter 2nd edition has arrived in a sleek black box and its fucking cool. 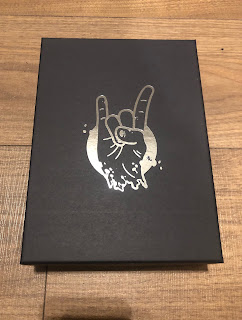 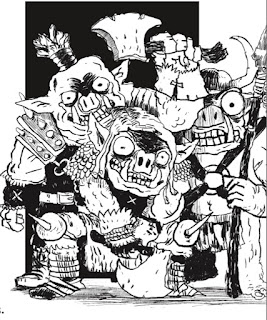