Dark Sun, part one: Our D&D is Different

Of all the TSR published settings, the one that seems to get the most love is Dark Sun. I find this both interesting and disappointing, a bit like Dark Sun itself. I have previously described it as the biggest false alarm in gaming and used other fairly derogatory terms in reference to it. Whilst I don’t care why the Forgotten Realms is shit or that Greyhawk is so boring, the fact that I consider Dark Sun to ultimately be a failure actually causes me physical pain because of its potential.

Dark Sun could’ve been good. It isn’t though. That makes me sad.


Sword, sandals and sorcery in a post apocalyptic world dominated by near immortal sorcerer-kings just sounds like it’s going to be the best thing in fantasy gaming. We get the scarcity of not just water but metal; all the weapons are of bone, stone or obsidian. It just sounds cool. There’s the additional focus on psionics. D&D has never had good psionics rules but at least they fit thematically here as opposed to feeling tacked on like they do everywhere else. There’s loads of original monsters, specific to the setting and they’re all pretty horrific. This is good stuff.


Magic is bad, it drains the life from the planet with every use. So this scorched, nightmarish landscape? The wizards did it. I love this. The cost of magic is something I constantly bang on about (see just about every post on this blog) and here we are with it literally costing the earth.

There are no gods. This is a massive departure from D&D settings previously published. It would be hard to get anything done in Dragonlance for instance without one of the pantheon sticking their nose in, banging on about the balance or some shit. True gods means there’s some hope of a higher power intervening to sort all this out. No such luck. Do not trust to hope, it has forsaken these lands...


It is all extremely grim. Slavery is an ever present evil. Most people live in city states, ruled tyrannically by the aforementioned near immortal sorcerer-kings. Their agents enforce that rule in the harshest, most self serving way possible. Injustice and inequality are ordinary facets of daily life but the wilderness is super deadly, so take your pick. 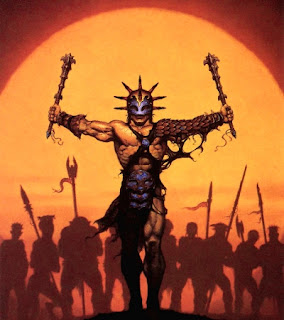 There are ancient ruins all over the place and tribes of escaped slaves and merchant trading houses, and political intrigue galore. This has great adventuring potential for a bunch of rag tag, rebellious individuals on the make in a world gone badly wrong.

There’s tons of cool art by Gerald Brom, so everything looks great too.


However, here endeth The Good Stuff. If you just took these elements and ran with them you have the set up for a great game. This was not to be though. Next time I shall discuss where, in my eyes, it all goes a bit wrong.
Posted by Dominic at 02:15