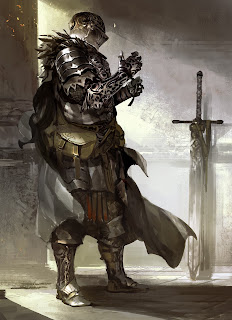 As my Dragon Warriors campaign is currently located half a world from Ellesland I thought I might share some of my old material in case it’s useful to other DW GMs. In any case I’m starting with this, a table on ten random knights you might meet in Northern Albion.

8 Sir Wilstan, axe and shield, black bear rampant on a field of argent. Gambler, owes money to merchants (including Earnwold) and others of low birth. Corrupt as a result. Raider. Sells slaves.

10 Sir Godward, mace, had a shield but constantly loses it. Three black crosses on a scarlet field. Drunk, friendly, not especially competent...

Don’t @ me about my descriptions of heraldry, if you want it done properly I cordially invite you to look elsewhere.

I don’t tend to include stats in these sorts of things, I just eyeball the Stats for an Average Knight in the rulebook and decide what’s appropriate at the time.

In my campaign Sir Beornward was a feature for a while, as part of a rival group of adventurers in the service of Montombre. The PCs ripped off the others’ Holy Book heist before they could get there, and ended up in a confrontation with the group outside the small church in Igham. Churches seem to feature in a lot in this groups violent actions.

Art by @kekaikotaki on twitter
Posted by Dominic at 05:13