I may have mentioned this but Book 6 of the original Dragon Warriors is the best book. It has all the top quality Legend content and atmosphere that can be fitted into one small paperback. 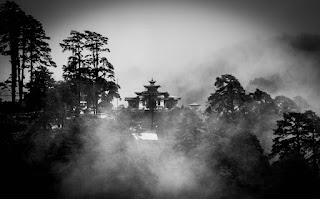 In addition to quality information about Legend, the setting devised by Dave Morris and Oliver Johnson, it discusses the possibility setting your Dragon Warriors games elsewhere. The options presented are feudal Japan, Pre Colombian Mexico and Roman Britain, as well as a discussion of various settings from fantasy literature. In typical Dave Morris fashion the reader is encouraged to look beyond Tolkien and Robert E. Howard to Leiber, Vance and MAR Barker. It was my first introduction to a lot of these authors and first exposure to Barker’s world of Tékumel (perhaps more on that later.)

For many years it was this that occupied my mind.... 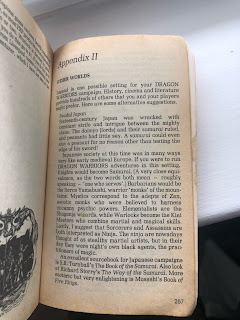 So when our Sunday night Dragon Warriors campaign came to a somewhat fitting, downbeat ending (with the PCs all dying while attempting to put to rest an ancient evil they had accidentally awakened several irl years earlier) something was required to fill the void on Sunday nights. We switched to Talislanta for a change of pace and enjoyed a short 12 session campaign of freewheeling sword and sorcery mayhem. It was a lot of fun by heart yearned for the dank forests and crumbling castles of Ellesland.

However, the players began to generate characters that didn’t really fit with what I had planned. A khanates barbarian and his wise, wandering, Mystic friend... So I suggested we transpose the game to the east, to Yamato, a land of warring clans, spirits and demons.

And thus began our Yamato campaign, now a few months old. The PCs being a samurai, the aforementioned barbarian and their comrade who is an adept of Zen. They have been sent North by their daimyo into an isolated mountain valley cut off from the rest of his lands. With war brewing in the South, no larger force can be spared. Their mission is two fold: To bring the rogue minor clans of the valley back into the fold and to investigate the apparent disappearance of one of his generals who ventured into the same valley with a force of four hundred men and had not been heard from since. The idea behind this set up is the PCs have a set of problems and obligations to negotiate but also the autonomy to deal with them how they see fit. They carry letters of authority from the daimyo but have no further support from outside the valley

Running a game set in an analogue of medieval Japan has some challenges but is so far turning out to be very rewarding.