DCC RPG, and I

I often think in terms of things I would like to do with games. The Great Hall of RPG neglect, the things I have bought and resigned to the shelf never to be played. It’s not that big compared to some. However while I stare out of the window wistfully dreaming of all the campaigns I would run if only I didn’t have to work for a living or have any other commitment outside of playing games it occurs to me that I have actually achieved some of this stuff in recent years. I mean, it’s not a great achievement like climbing Mount Everest or harpooning the great white whale (not that I would, he’s probably an endangered species.)

But I’m going to pat myself on the back for doing things I enjoy in my spare time with some explanation.

So I used to joke that although I had never played it, I used the Dungeon Crawl Classics rules more than anything else. This was because I used to rest my iPad on the rule book so it sat at a good height for video calls in every game I played. In 2020 I actually played (and ran) DCC RPG and it was good. Whilst the world was locking its doors against coronavirus I made some new friends via long time gaming buddy Jürgen and he ran a campaign of DCC for us (generously playing in English as I was the only non-German participant.) Almost simultaneously I was invited by Alex who plays in my Dragon Warriors to join a group running through a mini campaign of the Chained Coffin.

So I played as an actual player in someone else’s actual games, which was really nice for a change. Dungeon Crawl Classics turned out to be a fun system with a lot of support (Shout out to Purple Sorcerer online tools, they’re great) and an enthusiastic community of players. I actually wrote two funnels for it that I subsequently ran (one as a con game at Neal Bensons online BurritoCon) and used it to run a short Crawljammer campaign. So, DCC spelljammer and it’s cool, although it ended as I struggled to find time to prep and run it as I returned to more normal working life. 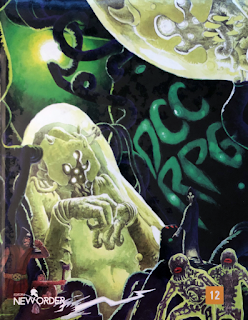 As a player I survived the Hole in the Sky and (I think) Well of the Worm which are two fine published modules before my former gravedigger turned world’s most average wizard moved to a tropical island to loot tombs and misrepresent himself as the god of some local people. He also invented the shovel-staff, a deadly combination of digging implement and wizardry apparatus (although fitting a silver spear point to one end may have been a step too far.)

In the Chained Coffin campaign we levelled up each session; playing through a series of adventures set in the Shudder Mountains, the Appalachian-like backdrop for the main adventure; until we reached 5th level and took on the the eponymous Chained Coffin itself.

My own games started with attempt to go full cosmic with the funnel Crashed Black Ziggurat from Outer Space. A fairly basic dungeon crawl I devised but as a lead in to DCC space adventures either by stealing a Crawljammer ship or using magic portals to escape the imploding Chaos Singularity at the heart of the Ziggurat (it’s actually a step-pyramid but ziggurat is a much cooler word.) From there I segued into the adventure from the back of Crawljammer #1 (it’s a zine, a really good zine, check it out) “Cry Freedom and Let Slip the Batmen of Venus” and then back to my own stuff as the PCs recovered their own Crawljammer vessel and came to rest at a free port inside a petrified giant aetheric space whale.

Meanwhile at the online version of BurritoCon I ran Warriors of the Grim North, another funnel based in my original sword & sorcery setting about street gangs attempting to survive the aftermath of a disastrous meeting, with gigantic nods to Street Kids of Ur-Hadad and of course the classic movie from which that plot was clumsily stolen.

I’m not currently playing DCC but I would go back to it in an instant. I considered making it the House system for the Grim North, should I ever run that again, but it would need tweaks to fit that setting. It’s basically too much work to hack IMHO, as spell and patron write ups are too involved for my lazy approach to preparation. So it will probably remain in my back pocket as something I could run at fairly short notice and know it would be a good time.