A Tale of Reckoning 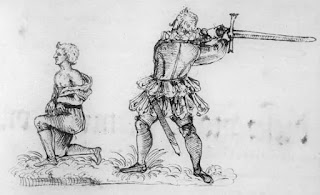 “They dragged the treacherous Sir Mortimer out into the chill of the desert morning. He had dogged their footsteps since Albion, aiding their enemies in Ferromaine and siding with the Knights of St Swithun to oppose them in the Holy Land. Aethelbald and Sir Raymond held him, and Sir Friewich struck off his head with the barrow blade. There would be no bargain.”

This was one of the high points of my five year long Dragon Warriors campaign, where the PCs were faced with a fairly significant choice. For this campaign began as a simple one shot where I was going to run DW for some G+ folks who I didn’t really know. However my inability to be concise and neatly tie up plot threads meant that the game just dragged on and was all the better for it. The simple tale of a journey to petition the bishop for funds for a friend’s church roof quickly spiralled (downward?) into a tale of relic theft, priest murder and faerie weirdness. So, standard Legend stuff then.

Sir Mortimer began as an entry on a random table of knights I created for the game. He was a sell sword with a questioning speech tick and a business like attitude that meant he didn’t believe anything was personal. Even betraying the PCs location to their enemies and assisting with the kidnap of their friend’s betrothed and shipping her halfway across the world. It’s safe to say that the PCs took a different view.

Having followed the eponymous hostage to Ferromaine they were able to rescue her from her father’s agents but allowed Sir Mortimer to slip through the net. He later resurfaced in Outremer as the PCs were attempting a dangerous trip behind the battle lines of the Crusdades in Zenhir to carry out a potentially very profitable spice trade. Now allied with the Knights of St Swithun, a crusading order of zealous heretic burners that had first crossed paths with our protagonists in session one, he sought to beat them to the Zenhiri saffron barons and establish an exclusive trade route.

Indeed he did so and the PCs only caught up with him after his armed pilgrimage was ambushed by fanatical Zenhiri tribesmen. Much like Xenophon camped by the ruins of Nineveh, the Knights of St Swithun fled into a ruined city in the desert. Here, a tense three-way game of cat and mouse developed as tribesmen, knights and PCs all hunted each other in the demon haunted remnants of this once great city.

The final confrontation with Sir Mortimer found him wounded and alone, offering not battle but a bargain. He had hidden the saffron but offered to share it with the characters if they gave their word to see him safely back to a neutral port...

This put the players in a tricky situation. They had put considerable effort and time (both in game and out) into this expedition. The silver they had been staked to buy the saffron was lost to misadventures in Ibrahim, so their intention had been to steal the spice from Sir Mortimer and the Knights. However, now the only way to profit was to provide succour to their enemy and form a temporary alliance for the sake of financial gain.

Instead they chose revenge.