The Lands of Legend 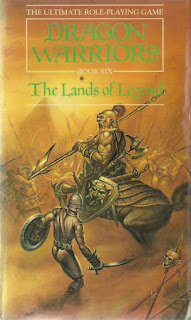 Given how scathing I have been of the latest release for Dragon Warriors I wonder if people are put off playing what is essentially a thoroughly enjoyable old school game with a lot of great flavour by its bum steer towards a more WOTC era D&D model.

The dark age/early medieval but folklore beliefs are true milleu is suggested throughout the adventures in the original books and in the monster descriptions but really comes into it's own in Book Six: The Lands of Legend. This is where the meat is. Even while the other Dragon Warriors books sat on my shelf unread for years, I would periodically peruse this one because it was better than pretty much everything else. When people talk about DW fondly it the setting that they comment on, not armour bypass rolls or the spell expiry mechanic (although that is a good one.) Book Six was all setting, all day.

Cool hand drawn maps? Check. Brief yet adequate descriptions of various countries and regions? Check. There are no discourses on the types of hats worn in Ereworn for example but we do learn that "at night the peasants shutter their windows and cower by the fireside while goblins dance on the rooftops and the Devil, they say, stalks the land with his two hounds—Pestilence and Plague." Excellent.

Russ Nicholson art you say? How about this? Boom.

Then there is the Lore of Legend. This is a chapter that is part magical item description, part rumour, part myth, part adventure hooks and wholly awesome. I would like to reproduce whole sections of this. The tale of the Immortal God King was always a favourite of mine as are the sections on Places of Magic and Mystery, and the Travellers Tales.

Rules for tourneys would seem essential and are presented in all their glory allowing for the random generation of jousts and melees.

You also get another profession in the Warlock, a combination of warrior and wizard. Not sure if the game needs another magic user, this takes up to four, but some of the spells are nice and my players liked this one in the olden days.

The adventure, Mungoda Gold, is an interesting one. It takes the PCs to the "Dark Continent" of Legend to trade for gold and grave goods, meet exotic NPCs and maybe explore some strange ruins out in the jungle. I've never run it but it looks solid.
Posted by Dominic at 10:45