On The Isle of Dread

The Isle of Dread is my favourite old D&D module. This isn’t a review, it’s a self indulgent nostalgia post. My copy of the Isle of Dread arrived one Christmas along with the D&D Expert set. You see I was getting quite good at D&D by this point and Basic no longer applied. I was definitely more of an expert. If you weere a child of Mentzer Basic like me then there was no module included in your Red Box, just an intro adventure in the DM’s book. However once I had the Expert Set I owned an honest to god real module, and it was good too.

If you’re not familiar with the Ise of Dread it’s a hex crawl set on what amounts to Skull Island from the King Kong films complete with pirates, lost civilisations and dinosaurs. This type of pulpy, sword and sorcery adventure is exactly what I want from my D&D games. The only thing really missing from this is a gargantuan ape of some kind.

I ran this in 2017 in the bar at Dragonmeet for about six hours. I could’ve gone way longer but people had trains to catch. I did tease the presence of a huge albino ape but the PCs never actually met one. Instead they befriended the cat people, fought with the spider possessed locals (in a slight change from the original text I made the Aranea fist sized, mind controlling spiders that rode their human slaves as mounts), were on the receiving end of a triceratops rampage and loads more. 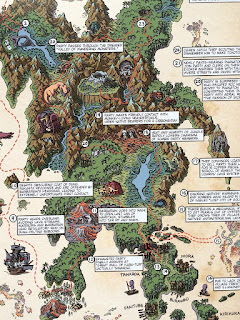 What this module delivers is encounter tables and adventure locations. Some are simple lairs but there’s a proper dungeon on Taboo Island too. Exploring the Isle is enough fun on its own but it’s possible to add whatever you like to this framework, develop the various factions, go pulp adventure crazy. I mean the cover to my copy (the orange one) has a Viking, a mongol warrior and a wizard fighting a T-Rex. That’s some good D&D right there. Throw a few five room dungeons in there and you’ve got the makings of a short campaign.

This is, for me, where D&D games shine. Play styles are exactly that and you can do anything with almost any game and it still be a good time. Pulp sword and sorcery is retro D&D all day for me though.