I don’t hate clerics, I just think they’re limited as an archetype. Fighter, Magic User and Thief are much broader in their application, Rogue even more so (to use the new parlance,) but the existence of the D&D cleric in your setting implies quite a lot about it that the other classes do not. So, in the right setting the cleric is great. However; if we accept that I like to run games that generally follow either a low fantasy or sword & sorcery theme then clerics, with their magic powers direct from the gods, do not appear thematically appropriate.

However the clerics access to healing magic and the ability to turn undead is baked into the game. A low level D&D party’s chances of survival are greatly increased by the presence of the cleric to hold off the dreaded level draining wights and produce cure light wounds spells, especially as those “light wounds” are often near fatal. Even if we examine TSR’s ultimate our D&D is different world, Dark Sun, they’re still plugging away with the cleric even though “there are no True Gods of Athas” is one of the stated tenets of the setting. I could digress about how Dark Sun is the biggest false alarm in gaming but staying on the cleric they are now the worshippers of elemental beings (these are not GODS though, no freaking way) who provide them with spells and the power to turn the undead.

The slightly maligned AD&D 2edition rules allowed for a fair bit of variance in the class with the Priests of Specific Mythos. This could end up being a lot of work though as you tailored the class to fit each God from your setting but also doesn’t solve the problem if your approach is one where direct godly involvement in the PCs’ lives is limited.

And so what do I do with this big chunk of the rules, if the religious nature of the class does not fit my gaming aesthetic? Be less pretentious is certainly a valid answer.

However if you are aware of Crypts and Things, Newt Newport has a tasty little answer for sword & sorcery games. In those rules, based on Swords & Wizardry with tweaks from Akratic Wizardry, the cleric and magic user are combined into a Magician class. The Magician has access to spells from a combined magic user and cleric list divided into white, grey and black magic. White magic contains your healing spells and so forth, grey has illusion and similar, Black is destructive or morally dubious. This is nice and I really like it. In fact I really Crypts and Things in its entirety and I recommend you check it out if you have not done so. 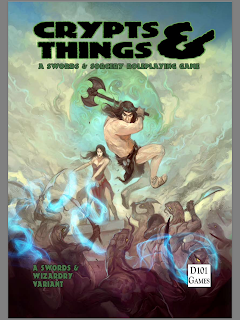 My solution to clerical issues in my Grim North setting was to reskin them. I didn’t want any sort of organised spellcasters existing outside of small cults and cabals. A powerful series of Churches with magic at their disposal didn’t suit the ideas I had for religion. I declared clerics were now “mystics.” Their powers were virtually the same but were psychic in origin rather than bestowed by the gods. We were playing S&W White Box and the only real mechanical difference I made was to remove the ability to turn undead and instead advance the spell progression so that they had a spell at 1st level. I also reskinned the spell names so they seemed more like psychic powers than clerical spells. I mean I’m not sure what the overall effect on the game this tinkering had but it certainly made me feel better about the whole thing.

Also Paul C, better known these days as The Wizard of Macke Town, wrote this up into a tidy little pdf for Mystic players to refer to, available here.
Posted by Dominic at 22:47