How the (Grim) North Was Run

I have alluded in my previous posts about Carcosa and sort of thinking about Runequest, that I do not prep very much to run games. This is true. I’m not anti prep, I think having something ready to go for each session is valuable, no matter how good you are at improvising your sessions on the fly. The danger of too improvisational an approach being that you come to rely on the same twists and tricks to keep things moving. This can lead to games getting a bit samey from session to session. Yet the ability to improvise is essential. As Dave Morris commented to me on his blog ”no scenario should survive contact with the players.” So I prep but I expect to improvise.

When I prep stuff it’s either a short list of notes or some sort of tool. A table is a good example, or a quick map. Brief notes about an NPC or location, or how the various factions within the setting have progressed their plans.

So in my Grim North game, how did this manifest? I’m glad I pretended that you asked... 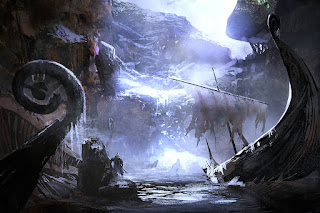 The Grim North ran as a mostly weekly game over google hangouts with a rotating cast of players. It was designed to be a drop in when you can sort of game and I always stated I would run it if two or more players were available. Sometimes it ran twice a week if I thought there were too many people for one session but this maybe happened once or twice over the course of a year.

The central conceit of the game was that the PCs were based out of the House of Mercenaries, Sellspears and Blades for Hire in the gigantic fantasy city-state of Nox Aeterna. The proprietor of the House would offer a range of jobs to the PCs based on what paid work was available. Also there were weekly rumours to pursue and massive fantasy city (and wilderness beyond that) to  explore if they so chose. The idea was this would present a sandbox in which short, episodic adventures could take place and if a player missed a session, it wouldn’t matter too much. There was no overarching metaplot (gods forbid.)

This was my campaign pitch,

The Grim North awaits. It is the Age of Samhain: The countless black spires of Nox Aeterna, City of Eternal Night, rest upon the ruins of a thousand forgotten civilisations. Insane patricians, bizarre cults and shadowy, eldritch forces all vie for power. Outside the walls, barbaric tribes war constantly with each other and the unforgiving winter. In dark, cobwebbed forests and haunted ruins, stalk malign beasts who want you dead and hordes of weird goblins steeped in slaughter and madness. This is old school D&D, where great dangers yield great rewards and a glorious death; or a ignominious demise, penniless, bleeding out on the snow.

I’m not sure I’m as happy with it now as I was at the time. Certainly there are no goblins in the Grim North these days but that is one of those things that in games grow through play.

So from the GMs side, at first, I leaned heavily on Vornheim to run the city but as I slowly added more of my own tables and quirks to the place it began to take on a life of its own. The influences I was trying to draw on were Lankhmar, Megacity One, Italo Calvino’s Invisible Cities, the film Dark City but generally it often felt as though I was channeling Ankh Morpork (unsurprisingly I
suppose, it does parody many of the same influences.) In naming some of the districts I strived to give each a distinct flavour, done with the hackneyed device of assigning regional quirks to them. Although there was no Thieves Guild, rival crews owned turf in various districts and were randomly generated off a table I devised to name them. They’re more like the gangs from the Warriors than anything else. 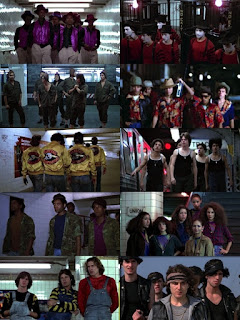 The ruling class of Patricians were supposedly all insane through inbreeding and being descended from ancient families whose origins pre date the modern city. As a result the table of Patricians included a list of random “insanities” although many of these simply resulted in weird or eccentric behaviour. I added tables for omens, weather (it’s snowing... moderately) and weird occurrences. There are random NPC Mercenaries from the House to act as hirelings and a table to generate cults (just their names really but it worked fine.) There is also a ridiculously over arcane table to generate Rekkar barbarian names and a better one to generate some tribe names for them to belong to. 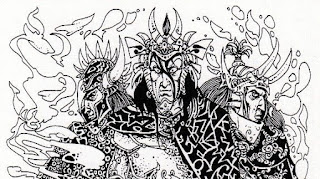 That’s sort of it really. Come up with a couple of rumours and jobs (attach these to various locations within the city,)  make a few random rolls before the session and set the PCs loose to do what they want.

Oh and improvise wildly. That’s important.
Posted by Dominic at 13:33 No comments: