What is Best in WFRP 1st Edition? 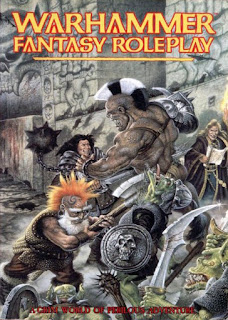 The careers system is great. You have class, which is pretty much nonsense but is broken down into the various careers and with that simple role you are baked into the setting. I mean they’re not all gold but I reckon if you find yourself playing a boatman or a rat catcher then you know you’re not going be carrying any jewellery to a big volcano any time soon. In my own game of WFRP I strived to maintain a low key, low fantasy vibe. An aesthetic typified by the Joseph Manola as “alcoholic gamblers knifing cultists in back alleys.” This is WFRP to me. The player characters in my game were a trapper, a muleskinner, a member of the town militia and a thief; who were all raised in the same orphanage and found themselves caught up in the machinations of a chaos cult that was tearing itself apart.

So you get a big chunk of setting right there in character generation. After all what other game allows you a small but vicious dog as part of your starting equipment? Conveying the setting in character generation is just good design. See Troika, Electric Bastionland, Apocalypse World or Beyond the Wall for a modern interpretation. I mean you could skip Apocalypse World and it wouldn’t be the end of the..

Then we have critical hits. In combat, the damage one receives is first taken from one’s wounds score until that reaches zero or below and then we roll on the critical hits table for some graphic description of the inevitability bloody result. Generally it’s time to spend a Fate point so we can retcon that result into just being unconscious or whatever but the players love rolling on those tables when they’re  dishing it out. I did too when playing through Castle Drachenfels recently. I kept chopping arms off things like vampires and daemonettes (not so much with the aggressive, evil furniture we kept duking it out with. Seriously we fought a bed, a cuckoo clock and a sarcastic door..)

One thing that’s mechanically nice about WFRP combat is you roll percentile dice to hit and then reverse the digits to give your hit location. So you roll a 35 to hit and that becomes a 53 which means *checks table* you strike the left arm. Well done.

I mean the magic system is garbage and the psychology rules are super harsh but we’re playing WFRP because we love the Grim (Old) World of Perilous Adventure, not because of its elegant mechanical superiority.

Email ThisBlogThis!Share to TwitterShare to FacebookShare to Pinterest
Labels: Beyond the Wall, Electric Bastionland, troika, WFRP

In his excellent RPG Electric Bastionland, Chris McDowall provides Spark Tables for the use of the referee (although he uses the term Conductor.) These are simply a few d20 tables sprinkled with setting appropriate terms to act as inspiration when you need something to kick start the imagination. When my own game prep process of staring out the window and drinking coffee fails me I resort to similar measures. After all, if someone has a good idea then I’m all about stealing it (and implying that it is my own work, ha.)

I saw these particular tables, or perhaps early versions of them used at Dragonmeet a couple of years ago when we pressured Chris into running a game for us with zero notice. He’d brought a manuscript of Electric Bastionland to show around at the con and after a few minutes of reading it and also being long time fans of its forerunner, Into the Odd, we coerced Chris into running it there and then. He took a few moments to sketch out a map and rolled on two spark tables for each location combining the results into something Bastion appropriate for us to encounter. Then we were off and a good time was had.

Using random tables to provide GM inspiration is as old as the hobby itself and it’s the sort of thing that I find most useful on my own prep. I’d rather create a tool for a specific session or campaign than I can reference again later, than say devise some specific story twist for this week’s game. The latter are better developed at the gaming table during play in any case. Of course you could always use something designed for this very purpose such as the Tome of Adventure Design by Matt Finch. This is filled with tables and while it has an old school D&D bent there’s a ton of material and it’s not really system or setting specific. Setting specific stuff is good though and at its best when you come up with it yourself to match the content and style of your own games.

To that end, I’m including two spark tables written for use with my own Dragon Warriors campaign. These were written back when we were still in Albion and are somewhat less useful now that the PCs are up to their necks in strife and woe in the Principalities of the Crusades.

Roll d20 as many times as you like on each table, combining the results to gain elements of inspiration for this week’s game.