So, following on from the ten random knights, I give you ten random priests. Except there’s really eleven, after I used one to fill a quick post in game and then added a replacement. Once again this is in the raw form I used in my own campaign. 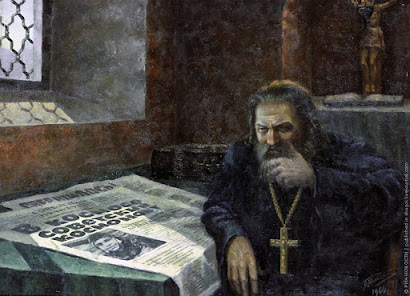 "God does not deny joy"

3 Father Rickon, blunt, black haired and bearded, "it is the will of God to suffer a fool, I am but a poor shadow of his grace" carries cudgel

4 Father Wulfric, willow thin, devoutly pacifist, sees the good in everyone even when their isn't any, trusts in God, forgiving of even the greatest sins

5 Father Osgar, brown hair, no beard, Tesshu like polymath, former knight, genuinely does not care if he lives or dies, faith is unshakeable, once took a beating from a Thulander thane to prove his faith was stronger than the man's hate, great calligrapher

8 Father Dunstan, tall, blonde, good looking bastard son of nobility, trained at arms but reluctant to fight, defender of the downtrodden, still has influence with his father

9 Father Cyneric, bookish, obsessed with the occult, knowledgeable but refuses to accept some things are better left alone (chapel at Saxton)

10 Father Aedelric, charming yet pure fucking evil in a cassock, sleeps with others wives, cruel to animals, revels in chaos for it's own sake and utterly self centred, although makes an outward show of piety......