Beyond the wall is good. It’s aims are to create a game that emulates the fantasy of Ursula LeGuin or Lloyd Alexander. So Earthsea and Prydain. Both good choices for inspiration in my humble opinion. While at heart it’s a B/X clone it has a number of additional things going for it that I really like.

Beyond the Wall is designed to be brought to the table with zero prep. I’ve run it twice with this exact amount of prior work and it’s been great at the table.

Character Generation is achieved by means of playbooks and involves collaboration between players and GM to build the PCs home village. Basically each playbook is a set of random tables that tells you something about your character and allows you to add a location or NPC to the village map. It’s cool. It immediately ties the PCs to one another through pieces of shared history and to the setting because it’s their home and they are helping create it. You get packs like Young Hunstman or Witch’s Aprentice or Assistant Beast Keeper. 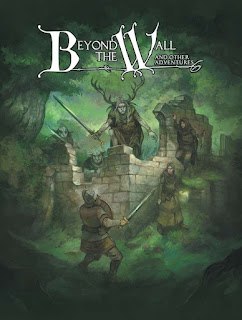 Meanwhile the GM gets a scenario pack, also a series of tables. This allows the GM to tie into the players ideas by populating tables with the NPCs and locations they create and rolling for a series of events that take place in the build up to the scenario as well as the contents of the scenario itself. The scenario pack also gives you a few useful bits like monster stats and suggestions for how to use them and also a big list of thematic names (which is always handy.) Included in the main book are a few scenario packs such as The Angered Fae or The Witch’s Mistake.

In a series of rolls and about an hour you should have characters ready and a scenario prepped and a collaborative world built. Well, it’s a village but it’s pretty much the world of the PCs because they are young heroes starting out on an adventuring career.

I’ve run Beyond the Wall twice, intending to use it in the manner it suggests. So we sat down over a Google meet session and did characters and a scenario pack. It took two sessions of two hours to resolve the mystery of the Angered Fae but we also created the PCs and their village and I did no work outside of the sessions. So a success for Beyond the Wall.

The second time I ran it, our scheduled session of Alien wasn’t ready for the table for IRL reasons so I offered to run BtW at short notice. Again I turned out a scenario pack, the Opened Barrow, and we used the same characters from the prior game, which was by now months in the past. I did add a new player and it was simple to get them to roll on their tables alone to generate stuff for their character and the village with one minor alteration (PCs get a bonus from one of the other players’ seated next to them at the table playbook so we determined this randomly instead.) Again I did no prep. I already had a lot of stuff to tie into from the previous game. One PCs ambiguous romantic involvement with another, now absent, PC’s betrothed. The absent PC now having gone missing in game plus the stuff from the scenario pack and I had loads to work with. Another couple of sessions worth it turned out. So for filling in at the last minute I was very happy with it.

I’d like to run a full campaign of this at some point as there are campaign tools in the “Further Afield” supplement that also look very handy indeed.

Email ThisBlogThis!Share to TwitterShare to FacebookShare to Pinterest
Labels: Beyond the Wall, OSR