I have run this and it’s good. The Anomalous Subsurface Environment is a science fantasy megdungeon placed in a post apocalyptic world of crazy wizards, dinosaurs, ancient technology and magic. It’s a quintessential old school renaissance American D&D product. It borrows heavily from the aesthetic of Thundarr the Barbarian. Or so I’m told. I’m British and we never had Thundarr over here but chat with American OSRist and they’ll rave about it. Or it’s potential.  I don’t know many folks that still heavily rate stuff that was on TV when they were children.

So ASE 1 is setting, gatehouse level and level 1. ASE 2-3 is, surprising no one, levels 2 and 3 of the dungeon. This is unfortunately where the science fantasy weirdness ends for now. My own players are on level 3 currently. While I have tried to piece together a level 4 of my own crafting for them to explore, it transpires that I suck at and borderline hate mega dungeon design. So that probably won’t be happening. I consider this a shame because if any more ASE was published I would lap it up and run it to death, like it was one of the many henchfolk who have met their demise in the dungeon and been unceremoniously thrown from a cliff, dubbed Fall-hala by the PCs. (Does waving a lighter around while you dispose of someone’s body in a local beauty spot constitute a ceremony? If so, unceremoniously is unfair) 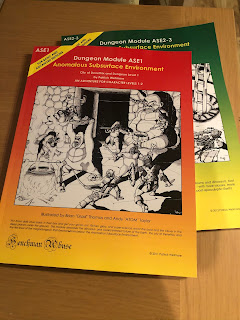 Mega dungeon play in the ASE and of itself has a lot to recommend it. It’s episodic. We finish most sessions in town so if there’s a rotating cast of PCs then it doesn’t matter.  There are factions. The PCs can engage in all sorts of diplomacy or just exterminate them and take their stuff if they prefer. The trap and puzzle rooms have been a massive source of planning and scheming between sessions, in some cases for weeks on end. One particular room involved a large group of PCs and their small army of henchfolk barricading dungeon corridors and excavating a wall while fighting of legions of random encounters to get at an elusive pile of silver pieces. Good times.

Henchfolk have played a pivotal role in the campaign for their valuable skills as hit point soaks for actual PCs. And also one player is now playing one of her former henchfolk after her first PC was eviscerated by a troglodyte matriarch with a double barrelled shotgun. There has been several dramatic henchfolk massacres, notably while fighting cornstalk mean on the mountain outside the dungeon; and battling the necromantic midgets, and their undead allies, in their tiny throne room.

This is not a dungeon of drow and orcs but of screeching eyeless freaks and cannibal morlocks. There are murderous clowns and towering great mushrooms. Strange oracles and synthetic life forms. There is a healthy dose of the weird. A PC has been turned green, one has had their gender altered multiple times and there is a whole load of stuff included because the designer thought it was cool. Flying head from Zardoz (I have his minions manifest as different aspects of Sean Connery) a weird robot Sasquatch thing (I don’t know what it is but there’s a mini of it,) Lion men from Thundarr and more crazy wizards than can easily be counted. This gonzo but done well. Bonus fact, PCs fear clowns. I don’t know whether it’s IT or the one out of poltergeist but middle aged nerds have absorbed enough negative clown media to be actively scared of them, when all they want you to do is attend the Anomalous Subsurface Circus and have a good time....

Preparation required to run this is limited. Just reading the module really. I did spend some time working on a party that the PCs were invited to which was well worth it. They hired a carriage, brought in a tailor to make their outfits, Stacy the halfling had her hair done. It was cool. However the low prep aspect is why I started running this. During the height of the pandemic with a lot of time on my hands I was able to maintain four games a week including two that I was running out of my own head. Having an already sketched out mega dungeon was a massive boon for Thursday nights as it required me to do very little other than show up on time with my dice, fully clothed and have my internet on.

I like it a lot and I wish Patrick Wetmore would write more of it.