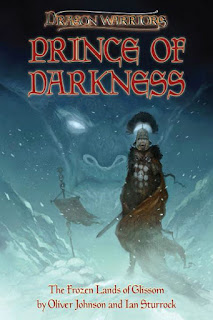 This is a tough one and I don’t have a coherent answer straight in my head yet but I shall post my thoughts regardless.

The war cry of The Freekreigsspiel Revolution is “Play Worlds, not Rules.” While I may never (never say never, I did after all run a short campaign in Talislanta recently) play in an FKR style that statement resonates with me. For while I may have/still run Dragon Warriors it is the world of Legend that lives large in my mind not any undue attachment to armour bypass rolls or magical defence per se. (Although if we are going to have lots of magic I am a fan of magical attack/defence, the spells of more powerful wizards should be harder to resist.)  I may have mentioned it before, a lot, but rules as written Dragon Warriors, although a perfectly serviceable rule set, is far from a perfect fit for Legend. When we examine Legend we see a world not unlike our own Middle Ages except the beliefs of folklore are real, not necessarily common but definitely real. There are trolls in the fens but you probably won’t find one bouncing on the door of your local tavern. At least not if I’m running the game (partly because you probably can’t afford to drink in a tavern.) So this would suggest to me that we should be looking at a fairly low magic rule set to accommodate all that medieval fake realism, creepy atmosphere and horror. Instead I believe the DW rules as written would work much better for a sword and sorcery world. Out of seven original Professions, at least four exhibit open magic use and the assassin’s meditative techniques are a grey area. In my own DW campaigns I have prohibited the majority of these, allowing players to portray knights, barbarians, assassins, and the players book professions. I did weaken my resolve on mystics but the jury remains out on the effects of this. By excluding magic using player characters we retained the feel of Legend more accurately but the unused portions of the book sit glancing askance at me, the players joking that “if only we were allowed to play warlocks, none of this would have happened...”

So while we can make it work what I’m saying is I would like a rule set to play Legend as it exists in the setting lore of Book 6 or in the original adventures from the back of the books (now collected as Sleeping Gods.) Dave Morris and Oliver Johnson play a house ruled version of GURPS and currently Dave toils away on Jewelspider RPG which we all hope is going to be the definitive Legend rule set (and from I’ve seen looks decent, although the magic rules remain unreleased.)

However, really after all this time can anyone’s vision of Legend (even that of Mr Morris) match the version of it that has lived in my head since I first read the King Under the Forest when I was eight years old? That setting has percolated away in my mind, for a long time free of the influence of the need to play role playing games, that I don’t think anyone else’s conception of it will line up exactly with my own. So whenever I gaze upon a dark Cumbrian forest, the elves that lurk there in my imagination are the capricious faeries of Legend; or the moors of my North Yorkshire homeland are haunted by the trolls of DW book one, not those of the Mentzer Expert set. That I think is the beauty of role playing games though, we all approach the same material in different ways see those worlds through the lens of our own experience, creating infinite fantastic variations on a theme.

As I lurch and weave my way randomly towards a conclusion I am beginning to accept that if I want to play Legend, rather than Dragon Warriors or house ruled GURPS or hacked Runequest I’m going to have to come up with something myself. Something simple that allows the setting to shine, in all its bloody, low key downbeat glory. That sucks because I’m not a game mechanics guy. I hate rules.

Or as the FKR would suggest I should free myself from the tyranny of rules and just play the world, using rulings to adjudicate conflict and occasionally rolling the dice to resolve that which cannot be settled by discussion. Based on an old method of resolving military war games amongst Prussian officers it was deemed that whatever system of rules was used it was an artificial construct which could therefore be manipulated and the outcome skewed from actual reality. In this school of thought only the judgement of an experienced referee could effectively simulate the outcome of actual warfare. The early days of role playing games were like this in the pre-OD&D era. While I’m not fetishising this as Ur-role playing or a One True Way, this is particularly attractive to me because I’m too lazy to write even a simple rule set for my Legend games. Or like a Judge Dredd one shot or something for a 40K Inquisitor game that is multiple orders of simplicity from Dark Heresy. I’m not sure it’s everyone’s cup of tea though.