I have, so far,  added two house rules for my Dragon Warriors Yamato campaign. DW is such a light system that it’s easy to modify to your taste and there’s nothing unified about the rules, so changing one bit isn’t going to affect anything else. As we’re going for an pseudo Japanese feudal feel I’ve gone for some basic Ki rules and a bit of sumo.

Now these are both complex and interesting subjects that definitely deserve a more in depth treatment than I’m going to give them but this is two small adaptations to an old rules light system for my home game so I’m not prepared to massively go to town on this.

For game purposes this is grossly oversimplified as spirit energy and quantified by Ki points. Player Characters have a pool of these, starting with one, that they can spend to gain Advantage on a dice roll (ie roll twice and take the best result.) Characters who entirely deplete their Ki reserves will recover one following a good night’s sleep. Otherwise Ki is awarded by GM fiat for positive supernatural interactions and play rewards. Eg all my players revived a point of Ki for freeing a lake spirit that had been imprisoned by someone believing themselves to be the servant of a demon god.

In narrative terms this represents a character’s ability, through martial/meditative/magical training, to focus their spirit into mundane tasks to achieve exceptional results when the pressure is on. As a feature they are required to state they are spending Ki before they roll. 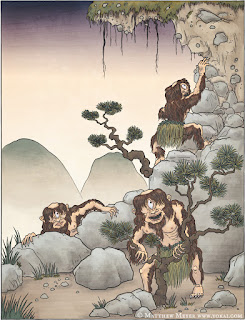 Dragon Warriors has no official rules for grappling or wrestling of any kind so in order to resolve a bout of sumo with a boisterous Yamawaro (a type of mountain yokai) I dug into my memory for old rules from other systems that I might be happy with. In general grappling is hard to get right in RPGs. Either the author of the rules doesn’t understand it or they understand it too well giving rise to the situation that grappling is usually abstracted too much or present led in unnecessarily granular detail. Also a sumo bout has very specific rules that don’t necessarily apply to wrestling with an opponent under life and death conditions. Sumo rules therefore do not follow the standard combat rules of DW but instead I settle for the following gross oversimplification of this ancient and complex martial sport:

Each participant calculates a sumo score. This is the average of their Strength, Reflexes and Attack scores. To simulate the fast pace of a sumo bout an opposed roll under the sumo score is made with the highest success on the die showing an advantage. Two consecutive advantages result in victory, and you can narrate this however you like such as pushing your opponent directly out of the competition ring or throwing them to the ground in spectacular style. Any roll which is exactly equal to the sumo score is a critical and results in instant and overwhelming victory, unless the opponent also rolls a critical in which case there is a tie....

In my game Khasan, a shipwrecked Khanates barbarian, was soundly thrashed by the one eyed, hirsute mountain spirit but did earn a point of Ki out of it.