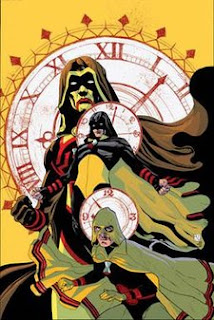 It is no goblin, no dragon, no black Ssú that is my greatest enemy in all of role playing games. It’s time. Time is against me. Work, life, family, social commitments all require time. Multiply this by the number of persons required to form the average gaming group and suddenly we hit time’s evil hench-thing, scheduling. Getting all the players together in the same room or online at the same time can be the greatest challenge facing any would be adventurer. Usually on my games it’s me that is the problem. At the moment this is definitely the case. Too much non-gaming stuff is intruding into my gaming time.

However this weekend we found if not a solution, then a compromise. The Hour Game. Number one weapon against Time itself. It might seem, when the average online session is probably three hours, that an hour isn’t enough time to play a meaningful episode of any game but bear with me.

Firstly our campaign is already established. We’ve been playing Dragon Warriors Yamato for a number of months now and the PCs know what they’re about.

Secondly we usually play for two hours with a tea break at the halfway point. When I say two hours, probably the first quarter hour is taken up with general chatting and catching up. After all we might be an online group but we’ve been together for in excess of five years and while I may never have physically met half the players we’re all friends. So in order to remain focussed during the actual hour of gaming some of the guys came on a bit early to chat, after all we haven’t seen each other for five weeks prior to this session.

Once we reached the start of the hour, I gave a quick recap and then we cracked on.

Staying focussed on the matter at hand with as little digression as possible we were able to gain a functional session in a time when something longer wouldn’t have been possible given my current time constraints. A victory then. The experiment continues next week... after all two of the PCs have now pledged allegiance to opposing sides in the mountain-storm spirit war