Christmas Scenarios are somewhat of a tradition in the world of Legend. If only because Dave Morris’ group plays a Christmas special every year and the scenario ends up on his blog as a Christmas gift to well behaved children everywhere. So, in an attempt to emulate this I wanted to do something similar for my Dragon Warriors players for Christmas 2020. However, instead of a one off special I was looking to integrate it into our long running campaign if possible. 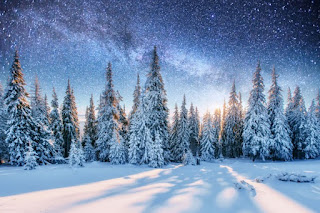 However, what makes a Christmas scenario? I sat down with my notebook and the internet and a large mug of mulled wine to think it over. Setting a game in Legend is useful in this respect. Being a close but no cigar version of our own late dark/early Middle Ages there is already analogue Christianity in the form of the True Faith so it stands to reason there would be an analogue Christmas feast. Plus we have a load of scenarios set around that time on the Fabled Lands blog to draw from.

Therefore, there is a rich vein of winter feast related lore to mine both from Christian and pagan traditions IRL, and their Legend equivalents. So make it Christmassy but also make it good. And not too Christmassy, this is Legend so let’s not let anyone have any actual fun (ha.) Seriously though Legend games require a deft balance between the mundane and the magical, this a setting of grim myth, folklore and horror grounded in a version of historical reality. Atmosphere is key. Christmas here should feel like a magical time but not a fantastic one. Let’s leave that sort of thing to our RPG cousins playing in high fantasy settings like Eberron. The atmosphere we’re after is O Magnum Mysterium or Coventry Carol, an eerie time of year rather than a a joyful one. It’s the Bleak Midwinter not Decking the Halls.

What approach then to keep it seasonal but not turn it into Asda in early November,  with Cliff Richard on the store radio and mince pies on the shelves despite the fact that it’s definitely still autumn outside? We’re not doing a hostage rescue on Santa, for instance. There is always the Die Hard route of just setting it at Christmas time. John McLean taking on euro terrorists in a skyscraper isn’t the most festive pitch for a movie, except that it’s set at an office Christmas Party (leading many to state that Christmas doest start until Hans Grüber falls from the Nakatomi Plaza…) Dave Morris own Silent Night scenario (or mini campaign) goes down this route, essentially being a ghost story with the Christmas Feast as the backdrop.

Whilst grasping at straws a minor epiphany occurred to me. My Dragon Warriors games are often at their heart a clash of traditions as the old pagan world slowly fades in the face of the new Faith. There are many Christmas traditions that have an obvious source and others where we pay no mind to their origins. For instance, if I were to do a straw poll of my friends and family, few of them would be able to tell me why people started placing a tree in their house at this time of year.

Plus I had watched the Hogfather on TV (it was rather good) and it had me in mind of repurposed traditions. The Old Gods doing new jobs, much like the faeries of Legend.

The characters in my DW games are already marginalised people at the edges of feudal society. They’re lordless wanderers, outcasts and itinerant mercenary types. Getting involved in forgotten traditions, that are important but no one else knows or cares about, is right up their street.

So, why does an old man climb the  Dritenwood Tor every Christmas Eve and light a warding fire at the summit? It’s to keep the Cold Lady out of this reality, of course, but what happens if he dies? Who lights the fire, and if no one does would the Cold Lady really appear? More on that next time I feel.